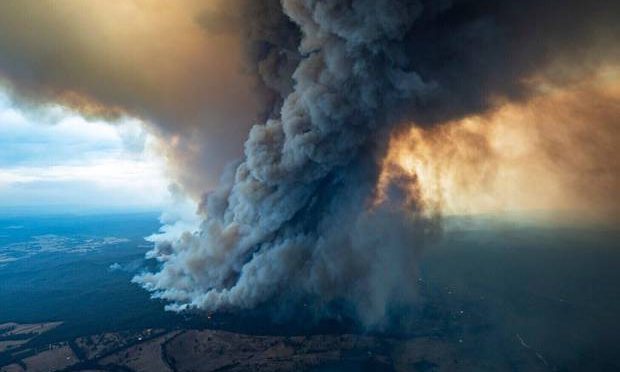 Visiting Australia, climate change is taking hold. My German nephew said studies at Marburg university suggested a more dramatic El Nino about now, they were correct. Only by my observation, I don’t know the facts with regard to El Nino.

So many bushfires in much of the continent, little rain. There is no more moisture in the land, the bush is kindling. Funnily enough I still meet climate deniers here, perhaps their own death will be the only thing to convince them.

To flat earth Australians, aussies who don’t believe science, ‘nah the earth is flat’. Sciene doesn’t make things up. It predicted exactly what is happening today. A result of climate change. Maybe you still choose to deny fact and claim this happened before? But then again aussies aren’t very bright and focus on other things. Did Collingwood win last year’s grand final?

It’s the end of the western celebratory season and almost time to return home. Much more important than my little problem of coma is global warming. I’ve more directly experienced it visiting Australia. I couldn’t even go to my mother’s home because of fire. Doubters, it’s effecting people’s lives.

Indeed there has been many ways to control the masses but is science one of them? The below video includes global warming as one such method of control, maybe we can’t believe science anymore and the atom doesn’t exist? Indeed there are too many consumers today, 8 billion of us, 2 billion cars, 2 billion cows, so many shops selling stuff. Maybe one day we’ll learn to live in harmony with the planet.

According to news reports overnight Melbourne had the worst air pollution in the world because of smoke from fire. The sky is not as clear as normal. To update, there was a fog the whole way to the airport yesterday. That sometimes happens in Singapore because of deliberate burning in Indonesia.

Weather has become one of the main items on the news, it’s taken over from war because of global warming.

Interesting watching CNN from Singapore and the news about Australian weather. It was about the fires and now the rain, both effects of global warming. Images of fire, bush, farms, floods. The prime minister sometimes talking of it, of fossil fuels, coal and economy which ought to be secondary.

We really need to face reality and be a global leader transforming to the carbon free future. It is after all the only way humanity will survive. We’ve already made many species extinct.